Has your dog been labeled aggressive or dominant

Let me start by saying that just because your dog is confident or pushy does not mean that you have an aggressive dog. A dominant dog does not automatically mean they are aggressive. For the purpose of this article consider the following:

Dominance:  Pushy or demanding behavior. This does not always mean you dog bites or growls but it certainly can include this behavior. A dominant dog believes they are the leader. Leaders of course, make all of the important decisions.

Dogs need leadership. Dogs will question who is in charge me or you. Dominant behavior left unchecked can turn into aggressive behavior. Dogs becoming aggressive is often not the result of “fighting to the top simply to dominate” But rather a result of “we need a strong leader” and “a leader must bring discipline to the group”.

In many cases aggression is a result of fear not dominance.  When afraid a dog has two options, fight or flight. The biting, lunging and aggressive behavior is often “I need to send a clear message to leave me alone”.

Dogs will often fill the role of leader if one is not established in a way they understand. Just because we think we are in charge does not mean our dogs see us that way. Just because they are not aggressive or “mean” does not mean that they do not consider themselves leaders.

Not all fear based aggression results in biting. Often times it may show as incessant barking, growling, lunging etc.

Fear-based Aggression is as the name implies based on fear. Typically a fearful dog will move away from perceived danger unless unable to get away. A few signs that a dog is uncomfortable as shown by body language would be; crouching down, ears back, yawning, looking away, freezing in place, licking of the lips or nose, etc. A fearful dog may bite if cornered or in some cases as the person or dog is turning away. A fearful/submissive dog will often submit or back down if a valuable resource is contested.

Dominance-based Aggression: This is not as common

A dog with this type of behavior rarely shows fearful body language as described above. A confident personality is often shown. As “king” or “queen” everything is considered theirs. As one might expect of a “king” or “queen” they decide how things are going to be. This means you move out of their way, you don’t pet or touch them unless they want you to and guarding of food, bones, etc is common. Guarding of sleeping areas is also common. One minute a dog may be Romeo the next he is turning to bite the hand that feeds him without warning or obvious reason. A dominant dog will often bite to correct a behavior he or she does not approve of. A dominant dog generally will not back down over a valuable resource but instead will fight for it.

So how might a dog get to be this way?

1) It starts with a lack of leadership.

If a dog doesn’t see strong leadership, they will often fill the role themselves. The things dogs look at to decide who is a leader is different from what we look for as humans.

2) It is reinforced by treating the dogs as “kings” or “queens”. In other words by being spoiled.

Obviously, we love our dogs and want the best for them. So we love them, pet them when they demand it, lavish toys and treats on them just for looking cute and praise them for the slightest deed. In short, they want for nothing! Often dogs who live the high-life without guidance and structure turn into spoiled brats. In some cases or dogs with more aggressive personalities, a life without leadership or boundaries creates a monster who learn to aggressively claim what they want – food, toys, sleeping places, access to attention. Please note that I am not saying that we should not love our dogs. In addition to loving our dogs we need to establish boundaries and clear leadership on our part.

Dogs who are aggressive to family members often do not have dominance aggression. Much more common is fear-based aggression.

To give an example, you come home after a long day of work to find that your dogs are on the couch. They are not allowed on the couch but you are too tired to deal with it and go to bed. This situation happens frequently. However, on the weekend you notice the dog on the couch and with an annoyed tone of voice, you stomp over to the dog and angrily tell them to get off the couch! You are shocked when your dog growls at you or worse yet nips or bites you when you attempt to move them off of the couch.

First, you were not consistent with your instruction – you allowed them to stay on the couch because you were too tired to deal with it.

Second when you did decide to handle the situation you were not calm and relaxed but rather angry or annoyed. Your body language speaks much more than your words ever could. So when you stomp over there with that annoyed tone in your voice your dog picks up on that energy and reacts accordingly.  Over time the dog’s reaction may become worse as they come to expect conflict in these situations and may react sooner and sooner.

A more appropriate course of action and often more effective would be to call them off of the couch and reward the behavior we want to see. If they persist and will not obey consider that leadership may be in question. If it becomes necessary to remove them physically it is important that we are calm and kind.

To give an example of a dominance based aggression, You allow your dog to sleep in your bed and they often sleep with you at night. However one night after a long day of work you come home ready to crawl into bed. Of course, your dog is already there relaxing. When you calmly and happily approach your bed your dog growls or snarls at you. You are shocked as you always sleep in your bed with your dog and this has never occurred until today. In this situation, your dog decided that he or she was comfortable and that you should sleep elsewhere. When you persist you may even get bitten. There were likely many signs before this point that this behavior was built upon however you didn’t know what to look for and this behavior now comes as a surprise. The situations described are very similar and yet the determined cause of the behavior is very different.

Establishing WHY your dog acts the way they do can help us determine what course of action is needed to change the behavior.

However, in both cases, we need to first build trust after which we can build respect. Only after we have BOTH trust and respect can we ask for obedience.

Building trust while gaining this leadership is key. If we establish leadership but fail to gain trust we may make the aggression worse! Leadership gained from force or fear is short lived and only lasts as long as the fear is maintained.

There are many ways to address this behavior but all of them require time. There is no magic wand we can wave over our dogs change this behavior. It is our responsibility as dog owners to take care of our dogs. Not only does this mean we provide food, housing, and love but also LEADERSHIP.

Would you like to know how we get to this place of trust and leadership?

Do you know someone who needs help with their dog? Check out my website or call me today! 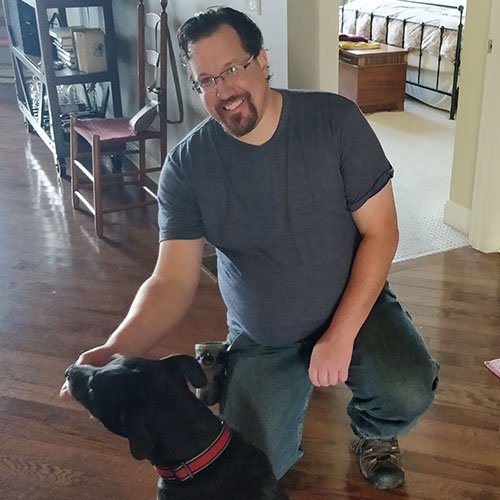